Sumrall says incoming linebackers will be big for Kentucky 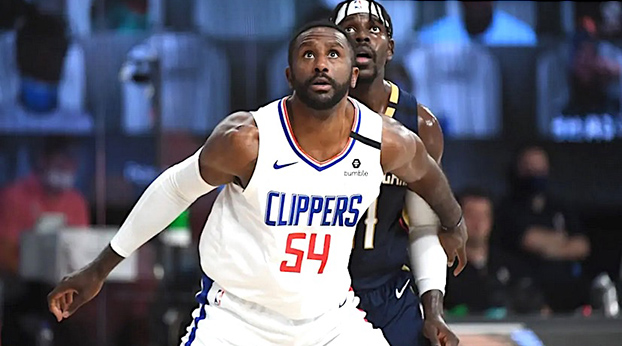 Patrick Patterson did not play with Rajon Rondo at Kentucky but he certainly is glad to be playing with him now on the Los Angeles Clippers.

The Clippers added Rondo to their roster in late March and the former Wildcat has a fan in Patterson.

“He’s a veteran,” Patterson said about Rondo. “He’s won championships, he’s been on championship-caliber teams. He knows the ins and outs of basketball, he has such a high basketball IQ.

“He’s that guy that we go to whenever we need to come together. He sees the floor like no one else. So just having him out there, he’s that big missing piece, a big part of the success that we want, the success that we need. He brings everything you want to a team, and it’s good to have him out here.”

One of Patterson’s former UK teammates, DeMarcus Cousins, has also recently joined the Clippers. Patterson and Cousins were two of five Cats drafted in the first round in 2010 after John Calipari’s first season at UK.

“That’s my big little brother. It’s like college days all over again. Extremely happy to have him here. Very fortunate, very blessed to call him my teammate again,” Patterson said.

Actually, maybe Rondo and Cousins should be happy to have Patterson as a teammate.

Patterson has adjusted to his role in a way not every NBA player can.

“It’s stressful at times because sometimes I don’t get told I’m playing or starting until 10 minutes before the game,” Patterson said. “But it’s my role. It’s who I am.”

John Wall was the No. 1 pick in the 2010 draft after playing one year at UK. Teammates Cousins (5th) and Eric Bledsoe (18th) while Patterson was picked 14th. Another Wildcat, Daniel Orton, went 29th in the first round but only managed to play in 51 games before his NBA time ended.

The other four Wildcats are still playing in the NBA but guess which one has played in the most games? That would be Patterson.

Wall has played in 610 games and Cousins 594. Bledsoe comes in with 686 games. All those are impressive numbers.

However, the combined numbers the four have put together since losing to West Virginia in the 2010 Elite Eight to end their collegiate careers are mind-boggling. They have scored over 38,000 points and pulled off almost 14,000 rebounds. The foursome has also handed out over 10,400 assists.

Remember coach John Calipari did say that 2010 draft night was the “biggest day in the history of Kentucky’s program” after five Cats went in the first round. It was a statement UK fans and former players did not like, and still don’t, but four of those five players certainly have had productive NBA careers.