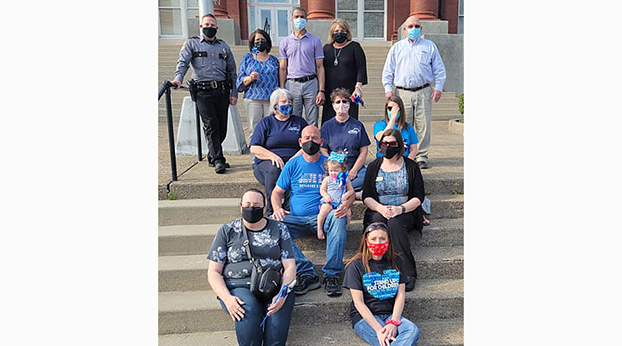 Local officials and CASA (Court Appointed Special Advocates) volunteers gather on the Lincoln County Courthouse steps before launching a child abuse awareness campaign on Main Street in Stanford. The group passed out pamphlets on child abuse, fun activities for kids provided by the local library and pinwheels for the community to put up to help raise awareness for Child Abuse Prevention Month. - Photo courtesy of Cynthia Hildebrandt 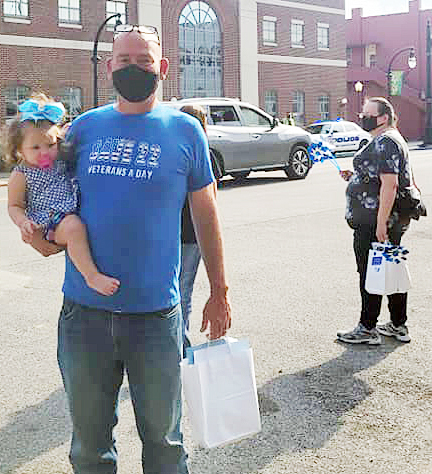 Stanford Mayor Dalton Miller, with his granddaughter Londyn Hatter in his arms, passes out bags filled with information about child abuse prevention as part of the Paint the Town Blue campaign hosted by CASA (Court Appointed Special Advocates) of Southern Kentucky. – Photo courtesy of Cynthia Hildebrandt

STANFORD – Painting the town blue is more than planting pretty pinwheels – those pinwheels represent a child in need of advocacy – and the visual colors are there to help raise awareness of the need to prevent child abuse across the state.

Now that CASA (Court Appointed Special Advocates) of Southern Kentucky is opening a local office in Lincoln County, local Volunteer Coordinator Amanda Mitchell is hoping to ramp up the local campaign and find more advocates for children in the area.

“We just got approved and got our keys last week for an office on East Main (Street) so we’re hoping to get that open soon,” she said. “It’s our way of integrating into the community a little bit more.”

The program, which is fairly new, serves Lincoln County, as well as Pulaski and Rockcastle counties, Mitchell said.

CASA of Southern Kentucky is a non-profit organization and is governed by a board of directors. The program is volunteer-based.

“A CASA volunteer is a community member with a passion for helping children. They give one-on-one time and attention to the children and the cases they serve, unlike a social worker who has many, many cases,” Mitchell said. “They kind of act as an extra pair of eyes and ears for the judge. They meet with the child, as well as the parents and teachers and doctors and other people in the child’s life to get a clearer picture of what that child’s life is like, and then they report to the judge.”

As the volunteer coordinator, Mitchell said it’s her job to support and supervise volunteers.

“Our program recruits and trains and supervises advocates,” she said.

The training to become an advocate is extensive, Mitchell said, but for good reason.

“It’s 30 hours of training just so we make sure all of our advocates feel ready and equipped to fully advocate for a child’s best interest,” she said.

In order to become an advocate, you must be 21 years or older, pass a background check and participate in the 30-hour pre-servicing training course. You must also agree to stay with a case until it is closed.

Mitchell said on average an advocate will spend six to 12 hours on a case per month.

According to the group’s website, in Rockcastle, Lincoln, and Pulaski counties about 800 children have experienced abuse and/or neglect and are waiting for a trained CASA volunteer to be their “voice in court.”

“It’s a great mission and a great program,” Mitchell said. “I’m lucky to be a part of it. Being from Lincoln County, I know there is a need for programs like this.”

Mitchell said the program has received an abundance of support from The City of Stanford and Lincoln County as a whole.

“We’ve been lucky in that area, we’ve gotten such a great response in the community,” she said.

“We are encouraging everyone in the community to display blue ribbons, blue pinwheels, something that can act as a visual reminder or visual representation for the need for action and prevention of child abuse in Kentucky,” Mitchell said. “Kentucky has consistently ranked number one in the nation for child abuse and neglect…”

On Thursday, April 15, Mitchell said the group will continue to paint the town blue by hosting a pinwheel planting ceremony at 10 a.m. on the Lincoln County Courthouse lawn. Everyone is invited, Mitchell said.

“Essentially, pinwheels represent a child who is waiting for an advocate, a child who has been abused or neglected and is another one of those visual reminders of the work that needs to be done,” she said.

“We’re hoping that getting the word out there and the campaigns will let people know that we’re here and we’re actively looking for people to join our mission,” she said.

SO YOU KNOW
For more information on how to become an advocate visit www.casasky.org.