Out with the old, in with the new: Stanford… 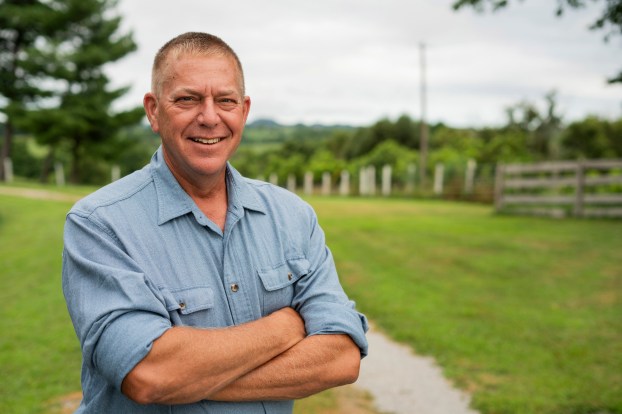 MICHAEL BROIHIER on his farm in the Chicken Bristle community of Lincoln County. He joined the U.S. Senate Democratic primary race on July 18.

STANFORD — Michael Broihier, a political newcomer who is a retired Marine Lt. Colonel, newspaper editor, educator and farmer, announced last Thursday that he is running for U.S. Senate.

Broihier is the third candidate in the Democratic primary field, joining another retired Marine Lt. Colonel, Amy McGrath, and Steven Cox, a health care advocate, in the charge to unseat Senate Republican Leader Mitch McConnell in the 2020 election. He introduced himself to the campaign in a three-minute video.

The 57-year-old Broihier, who moved to Lincoln County in 2005 with his wife, Lynn, also a retired Marine officer, when they bought a 75-acre farm in Chicken Bristle, has never held nor campaigned for any office before. In fact, he says he had never entertained the idea.

So why is he going after the “big one,” and not a county, district or state office?

“There are a lot of Kentuckians that have been left behind, economically and socially left behind,” Broihier said. “You can’t avoid seeing the news that says how great the economy is. That says how great Wall Street is doing. But you can’t see it out here. People are working really, really hard. We’re almost at full employment. People are working 1½-2 jobs and they’re not seeing the benefit that people of Washington are seeing. I mean, people are getting rich.”

Broihier, a former editor of The Interior Journal who has been substitute teaching in Lincoln County, says McConnell is an example of one of those “getting rich.”

“Mitch McConnell, 35 years ago when he started in the Senate, he was one of the poorest senators. Today, he’s one of the richest,” he said. “Wealth measured in tens and tens and tens of millions of dollars. You don’t get that on a government salary. There are a lot of people getting rich but we’re not seeing it here. So, the theme of my campaign is to get people in Kentucky to have the economic advantages that everyone else is having.”

Broihier used the recent news of the abrupt closure of a coal mine in Harlan County after Blackjewel Mining, LLC and its affiliate Revelation Energy, LLC, declared bankruptcy to demonstrate how an improved economy isn’t evident in Kentucky.

“These people worked, did their two weeks, got their paycheck and went to the bank on Friday. Monday morning, the bank calls and says, ‘You’re bouncing checks all over town.’ That’s 1,100 families,” he stated. “It’s not like you’re laid off. No, you’ve worked these last two weeks and, ‘Oh, by the way. Your paychecks bounced.’ What on earth are those 1,100 families, not people but families, going to do to make their car payment, their mortgage.”

Broihier noted that Revelation Energy has given almost a quarter million dollars to Mitch McConnell.

“They’re all doing fine, but there’s 1,100 families out in Appalachia not doing fine. It doesn’t affect them. People in Washington are doing fine,” he said. “My campaign is about economic and social justice for the people of Kentucky and I think that’s a message that’s going to kind of stick.”

And it isn’t just the in-state happenings that are holding Kentuckians down. Broihier also related how things happening in the nation’s capital may seem far-reaching but that those actions affect working class Kentuckians.

“When you’re a farmer and someone in Washington says we’re going to have a trade war with China, what does that really mean?,” he asked. “In the abstract it’s like, ‘Oh, we’re having this trade war with China. We’re going to put a tariff on China.’ But what it really ends up being is a tax on people in Kentucky who raise soy beans and corn and pork. And then you go over to the next iteration of this trade war and then all of a sudden it’s the bourbon producers. Things that are here in Kentucky – even U.S. autoworkers.Yes, they may work for Toyota, but they’re American. They’re made right here. We need to stop this kind of madness.”

“The effects are being felt out here in the country. People on Wall Street and in D.C. are getting rich. They can look at their stock portfolios and their bank accounts and say, ‘Wow, I’m doing great!’ But farmers, workers, families of Kentucky, they’re not seeing that kind of benefit. That’s what I want to make sure people hear. That when we make decisions in Washington that it’s the people of Kentucky who are being taken into consideration.”

Over the years, many people have tried to unseat McConnell without success. So why does Broihier, who joined the Marines the exact same year McConnell went into the Senate (1984), think he could be the candidate to finally beat him?

“I think I’m the guy to do it. Kentucky has been recycling Kentucky politicians against Mitch McConnell and losing every time. Instead of just another Kentucky politician who’s going to take a shot at Mitch McConnell, I’m a farmer, local newspaper guy, substitute teacher, someone different,” he said. “That’s why the campaign video was so different than most campaign videos. I think it’s hitting a chord with people. I think they’re saying, ‘This guy is different. He’s not a politician. He’s a farmer. He’s got dirt under his nails.”

If the last presidential election is any indication, the timing may be right for a non-politician to unseat McConnell.

But Broihier says that just because people voted for Trump doesn’t mean they have to vote for McConnell.

“They can like President Trump’s message or whatever it is about him that they like, but they’re not part and parcel with Mitch McConnell. They should vote for what’s in their best interest, someone who wants to bring economic and social justice to Kentucky. That we get lifted up while everyone else is lifted up,” he said. “People who voted for Donald Trump don’t have to vote for Mitch McConnell, because Mitch McConnell is not representing their best interest in D.C. Honestly, he cares about consolidating political power and his personal wealth. He doesn’t really give a damn about people in Kentucky.”

When asked how he expects to compete with McGrath and Cox in the primary, Broihier says he just plans to be himself and “we’ll let Kentucky voters decide.”

“I live here. I’m a farmer … I think, given the opportunity of meeting people and talking with them and hearing their stories, telling my stories, we can see how much we connect,” he said. “I don’t care if someone is a Democrat or a Republican. I don’t really care. They can vote for President Trump and vote for me. I’m not passing judgment. I want them to just look at me and say, ‘Is this cat going to be the guy who’s going to represent my interest?’ Because the guy in Washington, D.C. right now, Mitch McConnell, is not representing their interest. He’s getting rich. They (Kentuckians) are not getting poorer, but they’re working harder and staying flat. It’s not reflected in their wallets.”

Broihier and his wife have raised grass-fed beef, pastured poultry, pigs and sheep on their farm. The farm is also the largest producer of all-natural asparagus in the region, supplying restaurants and farmers markets throughout central Kentucky. And, while rewarding, he admits they haven’t gotten rich.

So where is the money coming from to fund his campaign?

“We’ve put everything we have and more into it. We’ve actually put stuff we don’t have into it,” he said. “We’ve emptied out everything we’ve got to get started and be able to hire people, campaign manager and video guy.”

Broihier said donations have provided a big boost to his campaign funding.

“It’s humbling. People that don’t know me are basically saying, ‘We trust you. We like you. We like your message. So go, go, go.’ I guess it’s the newspaper guy in me, but every time I see where someone has donated I think, ‘What’s their story? Why are they doing this?’” he said. “Some lady from Arizona made a donation. I don’t know why. She asked to remain anonymous but she gave her max that you (individual) can give to a candidate ($2,800) just off of reading articles and watching the video. It’s amazing. There’s been tons of Kentucky voters and tons of Kentucky interest and lots of small donors.”

“It’s going to be a grass-roots campaign. I’d rather have a million $2 donors or $1 donors than five $1-million donors because then I’d owe them. All I’d owe the small-dollar donors is honesty and my best effort – they’re not going to ever ask me for anything. They just want me to try my best and carry their message forward.”

While entering the political ring has been humbling at times, it has also been eye-opening as Broihier has talked to reporters about his campaign.

“For every minute that I’ve talked to a reporter in the last five days, people have warned me, saying ‘Mitch McConnell’s got $70-million. He’s going to destroy your family.’ Think about that. I can’t tell you the number of people who’ve used the term ‘destroy your family,’” he said. “You look to destroy another human being because they’re running against you? That’s what America’s politics has come to?”